This year's apprentice excursion took our trainees to Germany. There, they took a closer look at the brand with the star during a visit to the Mercedes production site and museum. In addition, our apprentices were able to feel a bit like professional footballers for a short time during a tour in the VFB Stuttgart stadium. 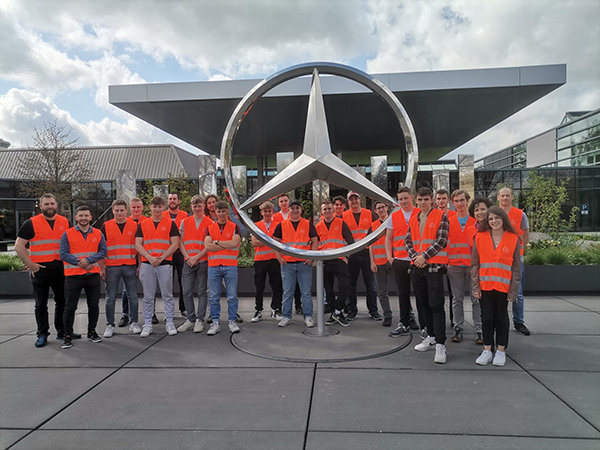 The GIS electric chain hoist is the Mercedes of hoists. This thesis could be heard from time to time from a satisfied customer or a reporting PR editor. Our apprentices wanted to get to the bottom of this theory during the annual apprentice excursion. On 25 April, they were not busy with milling, drilling or computer work, but went by car to Sindelfingen in Germany. The aim was to take a closer look at the brand with the star, as the largest Mercedes plant with around 35,000 employees is located there. The GIS delegation, consisting of 18 apprentices and 5 trainers, received a very exciting guided tour through areas of the car body parts production as well as the pre-assembly and final assembly and was not surprised to learn that not only the apprentice department of GIS is state of the art, but also the Mercedes production plant, one of the most modern car plants in Europe with about 1600 cars produced daily. Enthused by the many impressions they had gathered, the trip continued to Stuttgart, where they spent the night, followed by a cosy dinner with a short excursion into nightlife.

On day 2, a visit to the Mercedes-Benz Museum was on the agenda. On 16,500 m2 of exhibition space, visitors can not only admire some of the oldest automobiles in history, legendary racing cars as well as research vehicles, but also gain informative insights into world history. The stay at the fast Silver Arrows was followed by a short walk to the neighbouring Mercedes Benz Arena, home of the VFB Stuttgart football club. On a tour through the catacombs, into the locker room and out onto the hallowed turf, including a stop at the substitutes' bench, the GIS students were allowed to feel like football stars for once. Despite the current unfavourable league situation, VFB Stuttgart did not want to sign any of our young talents for some inexplicable reason, so that all participants then made their way home to Schötz. Inspired by Carl Benz and Gottlieb Daimler, they will hopefully continue to give their best on the CNC machines and in front of the computer screens. The realisation of the fantastic excursion: Both Mercedes-Benz and GIS manufacture high-quality products, but you have to save up your apprentice's wages for a GIS electric chain hoist for much less time than for a Mercedes Cabriolet. 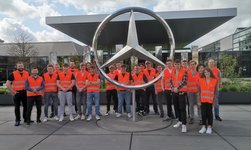 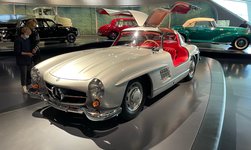 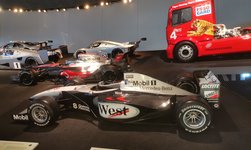 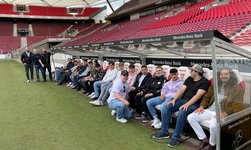 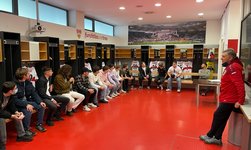 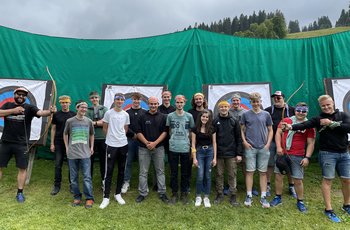 During the 2-day camp in Flühli, the apprentices mastered severa ... 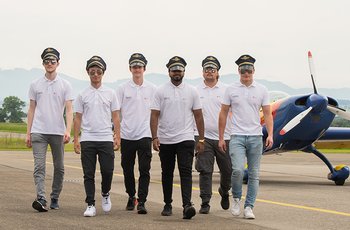 "Ready for take off!" The entire staff of GIS AG congratulates ou ...